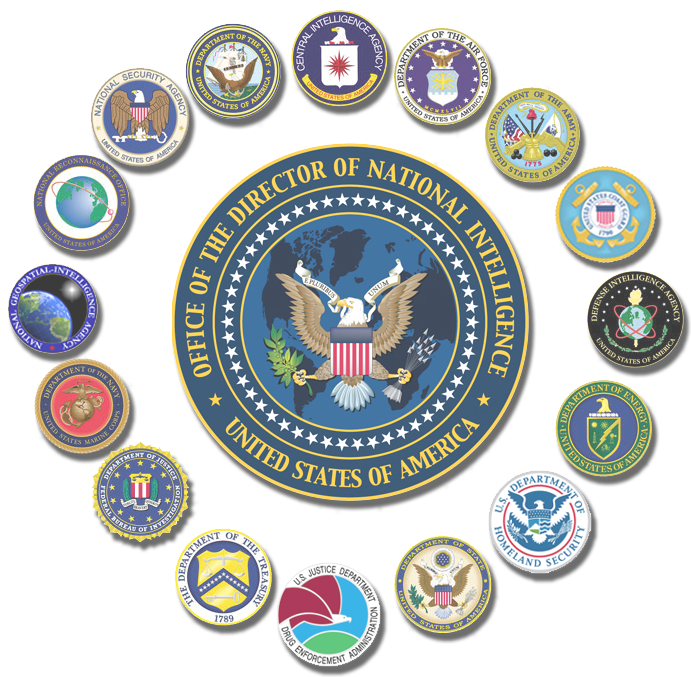 The United States Government must be very proud of how many enemies it has identified and created through dint of hard work over more than seven decades. Americans can sleep well knowing that its 17 official intelligence agencies (not to mention unofficial ones) are working around the clock to keep them safe from subversion, seamlessly coordinated by the Director of National Intelligence (currently Dan Coats, but perhaps not for long). Here they be:

From humble beginnings in 1882 with establishment of the Office of Naval Intelligence, the work of ferreting out enemies has spidered throughout the Federal establishment, linking up seven departments, often orchestrated by the CIA, a department unto itself. They and their missions constantly get shuffled around. The brood is well fed, having ingested some $70B last year. In 2013, data leaked by Edward Snowden was analyzed to estimate the “black budget,” which the research pegged at $52.6B, but there were missing pieces, such as profits from front companies and slices from the large pie of private arms exports, kickbacks likely couched as administrative fees.

Martin Grandjean’s visualization of some of Edward Snowden’s revelations in The top-secret U.S. intelligence “black budget”  (from data in the Congressional Budget Justification Book published by the Washington Post) illustrates how some of that money gets spent. Seventy percent of that total is said to go to private contractors, including dummy corporations (such as Air America, in its day the carrier of choice for deployments and renditions) set up by spy agencies. The CIA has also been known to tap budgets of federal agencies to siphon off funds secretly earmarked for it. One can safely assume that the numbers are underestimates and that nobody inside or outside government likely knows what more than a few of them really are.

Notice that there is no black circle for “special operations,” those cloak-and-dagger exploits that CIA and its military partners undertake with such deniable panache. Analysis, after all, is just a means to an end; counterintelligence is where the rubber hits the road. Nor is there any acknowledgement that the FBI (famed for its harassment of blacks and the old and new left in its infamous COINTEL Program) also gathers and acts on intelligence, in cooperation with its sister agencies, and supplies intelligence and other wherewithal to local and state police via a national network of some 65 data fusion centers that have kept tabs on such bad actors as Ran Paul, Occupy Wall Street, and Black lives Matter. (There’s a list and a map of them obligingly compiled by Public Intelligence.)

America’s enemies, both foreign and domestic, must quake in their boots when they consider the resources our government has committed to tracking them down and neutralizing their threats. Yet for all its spycraft and assets, the Intelligence Community was unable to thwart the assassination of a civil rights leader, a president and a presidential candidate, an attempt on a sitting president that nearly killed him, 9/11, Benghazi, and the “Russian meddling” that the news media can’t seem to get over. And, lest we forget, it consistently over-estimated the Soviet Union’s military capabilities and hostile intentions, and identified Iraqi WMDs where none were to be seen.

Or, one might well wonder, might none of these (save possibly for the attack on Reagan) have been intelligence blunders? Perhaps what happened was supposed to happen, and our boys in black made it happen. So at least the Intelligence Community hasn’t wasted the all of the hundreds of billions that we taxpayers have poured into their operation. That’s right folks, $200 per American last year and probably over $2000 if you count everything spent to keep the war machine’s gears turning.

No wonder anti-war activists get such stern scrutiny, as if they constituted so many monkey wrench gangs conspiring to defund the security state that sustains the American Colossus. The Intelligence Community wants to know who would rein them in and spends a lot of time finding out, because no matter what  the mission of an organization may be, its first priority is always self-preservation. The heart of the matter is that people—being living creatures—want to live, and so do the organizations they constitute. Think local police, many of whom feel free to shoot suspects, often unarmed, at will, and claim that they feared for their personal safety. It’s also way more convenient to drop a perp in his tracks than to tackle one. No matter how savagely an officer may have acted, back at the precinct house and at headquarters esprit de cops takes over and they circle the wagons to ward off their accusers. Gives a whole new meaning to “serve and protect:” serve the man and protect ourselves.

And so, also wanting to live, members of the public carry heat, just in case law enforcement doesn’t do its job should danger threaten. which will do little to protect them from the police or roll back the secret state. In spies, I’m afraid, we’ll have to trust. Trust, but verify they aren’t taking liberties with the liberties they’ve pledged to defend.