On Conflict in Ukraine and in Two War Stories (Newsletter)

This month’s topical commentary comes with a commercial.

In a perverse twist of ancient history, here comes the Ides of March and Ukrainians are falling to bombs, missiles, and shells aimed at them by a modern-day power-mad emperor. We’re in dangerous territory that could have been skirted. I can’t help but feel things would have been different had the US and EU not engineered a 2013 coup in Ukraine that threatened to make it an anti-Russian economic and military outpost. (If you object to the socialist slant of that article, see this 2019 paper by neorealist political scientist John Mearsheimer that largely agrees with its analysis.) Read and weep about what the West hoped to reap at Russia’s expense — an enlarged military perimeter, lucrative investments, austerity measures, neofascist nationalism…

These Western machinations may help explain but don’t excuse Putin’s invasion. What worries me most isn’t WW3, it’s how segments the GOP and its shock troops have been cheering on Russian war crimes. (Steve Bannon dismissively said ” Ukraine’s not even a country” and agrees with Putin that it’s not actually a war.) This has to be shaking up the party: Republicans imagining themselves patriots who can’t condone the invasion could split from the Trump acolytes and Putin apologists; the opportunistic hacks will fall into either camp depending on which way the wind blows conservative campaign money. In any event, the GOP seems to be done with liberal democracy at home and abroad. Beware the Ides of Mendacity.

Let Ukrainians know they are not alone. If you want to help them by donating money but don’t know who will reliably deliver it to whom, check out what GoFundMe is doing. That’s what I did. The crowdfunding platform has curated a list of large and small organizations involved in relief efforts you can pick over. (Click “read more” on that page for links to all the supported groups.) Or, you can give a block donation that GoFundMe will allocate. They’ve raised almost $2M so far.

Speaking of international relations, let me advertise a couple of war stories that explore their interpersonal consequences. 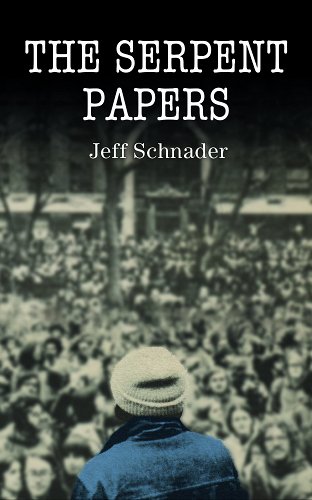 The first, concerning dissension over Vietnam, is by retired thoracic surgeon and debut novelist Jeff Schnader. He’s a fellow Columbia alumnus I got to know after chapters of his novel were previewed by The Write Launch. Find three chapters of The Serpent Papers, released this month by Permanent Press there along with a couple of his short stories. Jeff’s novel is set on and off campus during the riotous Vietnam War protests of the early 1970s. I remember those days well, though not as intensely as he. Student opposition to the war made me terminate my enlistment in CU’s Navy ROTC unit, and consequently a full scholarship. After I graduated as a pacifist pauper, the campus uprising intensified, as Jeff’s book chronicles with great empathy, verisimilitude, and a little weirdness. For specifics, visit his website and/or this post on my blog. I’ve not just ordered a copy, I’ve shelved it in my bookstore should you wish to grab one for yourself. (If you do, Jeff gets royalties and Geoff gets a commission. See Becoming a Bookseller to Beat the Odds from January to see what that’s about.) 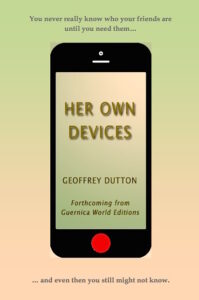 Someday you’ll be able to order my next novel there, but don’t hold your breath. Her Own Devices won’t hit the shelves for at least two years. I know, it’s hard to bear, but that’s when Guernica Editions, an esteemed Canadian publisher of literary fiction and poetry, intends to release it. In the interim, the manuscript (like one of its key characters, actually) hovers in limbo, desiring of deliverance but still a work in progress. The version Guernica Editions accepted won’t be the last word, nor is this mock-up for the front cover. Both need improvement before final submission, and input from benevolent early readers could help a lot (hint, hint).

Until then, here are some samples. Each edition of The Write Launch showcases a new set of poems, short stories, creative nonfiction, and novel excerpts from aspiring authors such as Jeff Schnader. This month it was again my turn. Chapter 9 of Devices joined two other chapters (3 and 8) on the site, all updated to the current version.

First, some backstory: Swiss expat Anna Burmeister, single mom and ex-activist with a dark past, occupies a two-room flat in Piraeus, Greece with four-year-old son Ramadi. She named him after his late Iraqi father, Mahmoud Al Ramadi, who sired him on his deathbed in Turkey. To know why they were there, how he died, and why that past haunts her, you can read the exciting prequel, Turkey Shoot. But Mahmoud’s not totally out of the picture. Languishing in limbo, his spirit remotely views people and places he knew in life, especially Anna. Throughout the book he pops up, invisibly, with soliloquies only we can hear.

Chapter three follows Anna and Ramadi to a clinic and then to a café where she has words with a truculent Greek nationalist. In chapter eight, afraid of being recognized, Anna flees from the taverna where she waitresses when that man’s sinister partner shows up at her table. She calms down in chapter nine and tails him when he leaves, only to witness something he does that will change the course of her life.

A few images of a felony that Anna’s phone captures in chapter 9 foreshadow hundreds more beamed from devices she’ll come to deploy. If you don’t want to wait to find out what they are and what they reveal, you’re welcome to sign on as a beta reader. Fill in and submit this form and I’ll email you a manuscript. Read it, feed back comments and suggestions, and I’ll send a copy of the published book. Trenchant blurbs and nifty cover ideas are also welcome.

Meanwhile, Ukrainians suffer, but so do Russians. Police there have arrested thousands of people at war protests, and especially target those clothed in blue and yellow in solidarity with Ukraine. We hear of pressure on NATO to institute no-fly zones around humanitarian corridors. While you can easily do that in your kitchen by swatting down a pesky fly, it’s a fraught strategy in a theater of war that only works against weak enemies, not to mention being illegal under the UN Charter.

Western economic sanctions are making Russian neighborhoods no-buy zones. Eateries like McDonalds and Starbucks are shuttered, and Russian businesses are becoming cash-only zones for increasingly scarce and expensive goods. If you think we’ve got inflation, the Russian people will suffer even more of it. There are no winners here. This — like all Great Power struggles — is nuts. We have met the enemy and he is us.

You can find this and previous Perfidy Press Provocations in our newsletter archive. Should you see any you like, please consider forwarding them to people who might in turn subscribe, and thanks.