The Gripes of Roth (newsletter)

Dear Readers,
Tomorrow, I’ve recently learned, W.W. Norton will publish Blake Bailey’s Philip Roth: the biography, nine years in the making and weighing in at a hefty 912 pages. At least three other biographers had attempted to chronicle Roth’s life since the 1990s; all were fired or became antagonized. When Bailey—who wrote well-received biographies of authors John Cheever, Charles Jackson, and Richard Yates—approached him in 2002, Roth was dubious. ‘‘Do you ever write about people who aren’t constantly drunk, or dead?’’ he wanted to know. ‘‘You would be my first,” said Bailey, and Roth hired him. 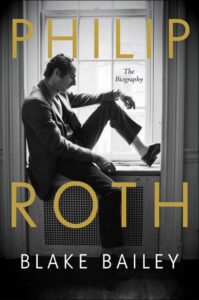 Up until Roth’s demise at 80 in 2018 he had been cooperating with—and perhaps micromanaging—Bailey’s monumental effort. And so, while he enthusiastically participated in the project, he didn’t get to authorize the final manuscript. From what I’ve read, he probably would not have approved.

“I don’t want you to rehabilitate me,” Roth had instructed. “Just make me interesting.” Well, according to Parul Sehgal’s somewhat tepid NYT book review, Bailey focuses much more on Roth’s life as “an aggrieved playboy” than on the writing of his oeuvre, more perspiration than inspiration. Bailey reveals or recounts details of Roth’s “florid love life,” which Roth’s photo albums of old girlfriends documented and Bailey reverently chronicled, mostly from Roth’s perspective. Sounds like rehabilitation to me. You can learn more about what transpired between them in this AP article by Hillel Italie from last year.

If you’re into Roth you must read his highly amusing review of the bio from beyond the grave in last month’s Harpers, penned by one Joshua Cohen (American novelist, also Jewish) channeling an irate Roth. In it Roth gripes:

“An unconscientious reader [of the biography] might get the impression that I spent most of the Seventies haggling with my agents and editors about royalties and advances; that I spent much of the Eighties yelling at book publicists and book designers, or hassling assistants about flap copy, jacket copy, and ad budgets. If I took a break from that, I’d fuck a proofreader, or a friend, or a friend’s daughter, or a neighbor, before toweling off and firing my agent, or switching editors. In Bailey’s telling, or non-telling, it’s as if I rarely wrote, and never rewrote, and the lacuna is so conspicuous that I can only conclude that my writing doesn’t interest him at all.”

But look at that gorgeous, urbane cover.

The moody black-and-white photo on book’s dust jacket gobsmacked me. The author informs us that it was taken in 1968 for Life Magazine, just before Portnoy was published and Roth got rich. It mesmerized me despite not being a fan of Roth’s self-obsessed alter egos and over-the-top confessions and confrontations. What struck me was how eerily Roth’s pose resembled one in an old photo of me, a self portrait at the tender age of 19 that I unearthed several years back and then wrote a little memoir about. 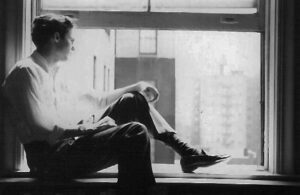 This was me as a Columbia sophomore in ’63, pensively gazing out the window of my Morningside Heights apartment, possibly at the Orange Julius stand down on 110th Street. More than four decades would pass before I would call myself a writer, not that I’ve authored anything on the order of what Roth has wrought (31 acclaimed and berated books, mostly novels, several adapted into Hollywood films). Our only similarity may be the number of girlfriends we each had, though not then in my case, involuntarily celibate as I was.

Finding the photo excavated collegiate memory traces. Nostalgia got the better of me and I wrote an encouraging letter to my younger self, who back then was struggling with love, identity, and direction, as sophomores are wont to do. As I couldn’t post my letter to young “Jeff,” I did so online along with the photo. Check it out, if you like.

And, lest I forget to inform y’all, last week I completed the fifth draft of Her Own Devices, over which I labored for two months. I’ll take a breather to pitch it and get feedback from folks about it. If you are curious enough to check it out and up to telling me what you think, let me know and I’ll send over a PDF.

Ta-ta for now. Get yourself shot.
-Geoff

From Perfidy Press Provocations, a quasi-monthly newsletter, on April 5, 2021