The “Beautiful Madness” that is Exarcheia (newsletter)

“The walls here are like a daily newspaper, trying to make us get off the couch and roam the streets demanding all that is written on the walls.” — Níkos Tρavvós

Breathlessly stumble down the western flank of the Athenian tourist destination Mount Lycabettus and soon you’ll find yourself slack-jawed, taking in a part of the city that looks and feels a whole lot different from the tourist haunts just blocks away. You’ve entered the twilight zone, a compact triangular enclave called Exarcheia, home to artists, poets, intellectuals, immigrants, communists and anarchists, a creative churn of radical visions, defying authority, making its own rules, perpetually decolonizing itself. Wikipedia tells us that in Exarcheia:

On December 6, 2008, a Greek police special guard shot and killed 15-year-old Alexis Grigoropoulos within blocks of the Athens Polytechnic University, leading to the largest protests in Greece since the end of the dictatorship in 1974. Protests originated in Exarcheia and the neighborhood continued to be the epicenter of demonstrations as they spread across Athens.

In the aftermath of the riots, collectives and movements in Exarcheia expanded initiatives experimenting with new political formations, especially to provide public spaces organized around an anti-hierarchical and anti-commercial ethos. For example, activists turned a parking lot into the guerrilla Park Navarinou, which hosted events such as ticket-free movie screenings and anti-consumerist fairs. The Sporos collective developed solidarity economies through trade and sale of Zapatista-produced goods, and the Skoros collective promoted re-use, recycling, and sharing practices. Other new and renewed political formations in the neighborhood included producer or consumer cooperatives and collective kitchens.

That’s my kind of town—not just for the earnest camaraderie of its fusion politics, but experientially too. A walk through its tree-lined (thanks to civic-minded residents) streets must feel a little like an acid trip through an urban graphic novel. Imagine coming upon this trompe-l’œil owl peeking out from a wall by Balinese street artist known as WD. 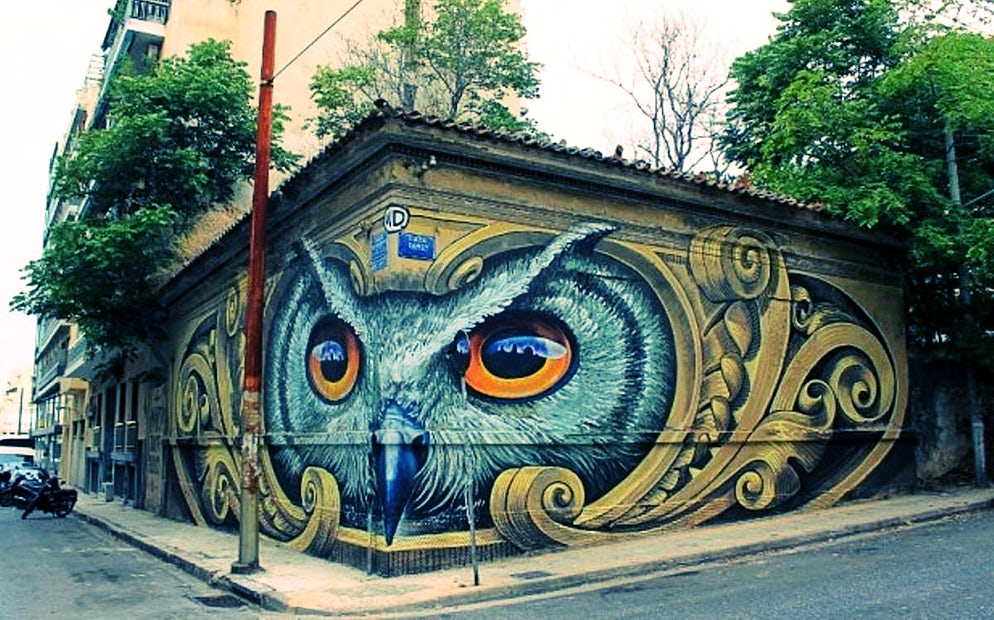 Turn the corner to find a homeless man sleeping on the street. You might want to avert your eyes, but you can’t. 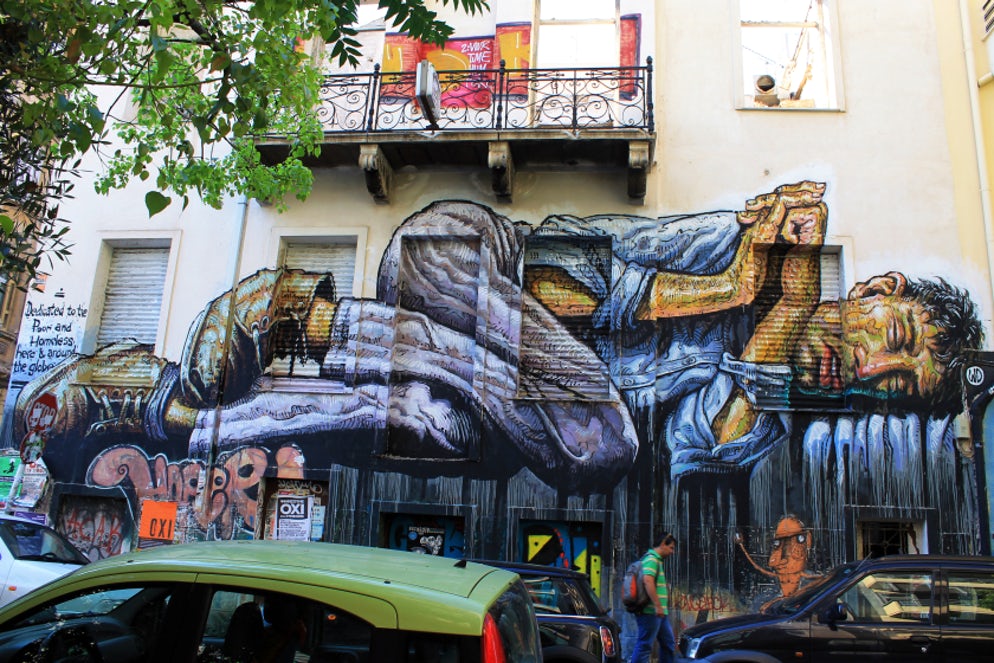 Emblazoned everywhere, embellishing walls, shutters, poles and postboxes and the pavement itself, street art reifies harsh realities and human aspirations. Not just oracular epigrams scrawled in playful fonts (mottos, they call them, many in English), but charcoal renderings, cartoon characters, and astonishing paintings and murals (some rising several stories over the street) mark your passage and mess with your mind everywhere you wander.See more of these striking images in Street Art & Counterculture in Exarchia by Chrisa Lepida at itinari.com, including a captivating HD video tour of Exarcheian life and street art (45 min, in Greek with English subtitles, also on YouTube) that includes the quotation up top by artist/professor Níkos Tρavvó. (“Beautiful Madness” is his term for its ethos.) Also interviewed are local residents and street artists, including a camera-shy WD (who painted both of the above). Skip to the end (37:00), where he completely obliterates someone’s graffiti on a section of wall, masterfully rendering an evocative morose harlequin figure right before your eyes.

Exarcheia has been on my mind because scenes in Her Own Devices are set there, and I want to capture the unique flavor of the district as vividly as I can. Never having set foot in Athens hasn’t helped, but I have compensated. Prodding and zooming online maps (like my character does), I’ve jetted around the area, touching down in Google Street View to walk the streets and ogle their surroundings. I’ve steeped myself in whatever accounts I can find about life in Exarcheia, such as these by Adrianne Kalfopoulou in Image Journal and Cara Hoffman in The Daily Beast, and appropriated its local color and recent events for my book. Here’s Anna and son stepping into Exarcheia in chapter six:

A few blocks walk from the Omonoia Metro station, Anna smelled freedom and Ramadi sensed it too, taken with Exarcheia’s multihued graffiti and murals espousing liberté, fraternité, égalité and death to pigs. Cranky elements of the bourgeois media liked to call the breakaway district Anarchia, but serious community building took place here. Containing Greece’s largest archeological museum, hard by Athens University, and not far from the Acropolis and Syntagma Square, it was a defiant redoubt of self-determination. The powers that be had largely left the district to is own devices, perhaps to catalog whatever organisms this political petri dish incubated. Within its confines, refugees were welcomed and accommodated in “liberated” buildings. Also liberated was an entire block the city had heedlessly razed only to replace it with a parking lot. In response, angry neighborhood residents had defiantly transformed the concrete wasteland into an urban oasis, a leafy commons they dubbed Parko Navarinou, which, its liberators asserted, “breathes, plays, creates and dreams, as if alive.” And alive it was, much of the time.

This portrait, tenderly rendered by an anonymous artist atop a cornice, sets the scene for my blurb of Her Own Devices at Perfidy Press. (Click it to visit that page.) Youngsters such as this young immigrant girl are easy prey for rapists and traffickers; that’s the connection to my story arc and what drives Anna, my heroine, and she drives me. After partnering for five years, Anna and I are often in each other’s head, and our conflation is part of the story too. For us both, Exarcheia is much more than a freakish outdoor art gallery; it’s a place to make communitarian ideals of justice, equality, domestic tranquility, and self-reliance real enough to be worth fighting for.

As I said, that’s my kind of town. For more about the novel and its progress, click here.

All images cc by their respective creators.