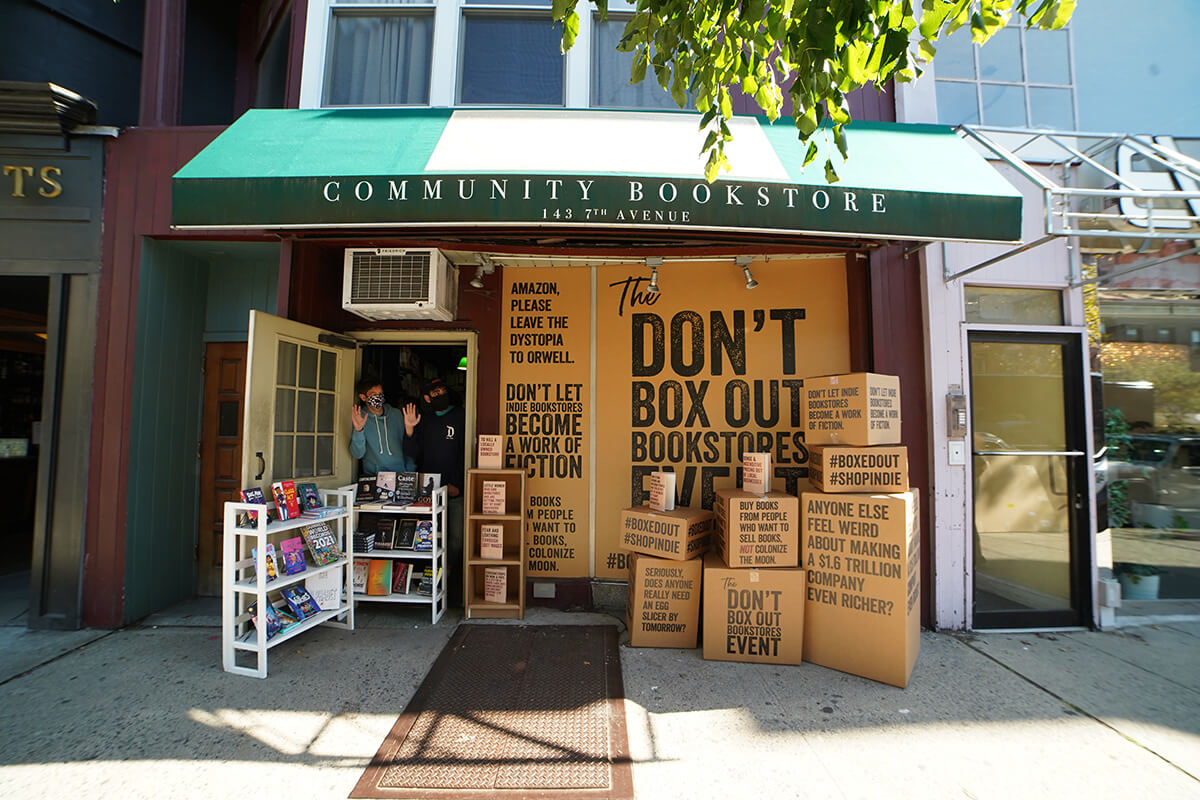 Becoming a Bookseller to Beat the Odds (newsletter)

December flew by with no opportunity to write to you, for which you may be appreciative. And as January is already half-consumed, before February is at our throats let me fill the void with a rundown of how things have gone for me and other independent publishers and booksellers during the pandemic. It was, in a word, fraught.

When Covid-19 hit I was six months into writing a novel and had started peddling the manuscript, which has since been offered a home of its own. As writing that book was my primary occupation, I felt well situated to make the best of quarantines, social distancing, and lockdowns. And while the pandemic created misery and hardship for many (particularly sufferers, elders, caregivers and other front-line workers, parents of school-age children, and the kids themselves), it didn’t much affect my daily routines. I continued to soldier on at my writing desk and attended to whatever necessary business rudely interjected itself.

As the pandemic ground on, the entire publishing industry suffered from the general dislocation. Paper was said to be in short supply. Publication schedules were extended. Authors couldn’t do book tours and some put publication on hold. Libraries and bookstores had shuttered and were struggling to operate online.

Our local library fell back to digital-only circulation. By summer they’d figured out how to disinfect books and deliver them via a tent outside, though it took longer than usual to get one’s filthy hands on them. In recompense, they abolished fines for late returns. I wonder how many of their books and videos got squirreled away as a result.

Our town’s only bookstore also had to make do. Between shipping books ordered online and by phone and delivering them curbside it managed to hang in there until it reopened for socially-distanced browsing, as have local libraries.

One could chance upon my novel Turkey Shoot in our library, but not in that bookstore. In fact, to the best of my knowledge, no brick-and-mortar bookshop stocks it, though most will let you order a copy, printed on demand.* Even this wouldn’t be possible had I published through amazon.com, perish the thought. The trade group American Booksellers Association discourages its members from retailing Amazon titles, although some are Amazon affiliates, and has filed briefs with every state state attorney general to rein in the company’s monopolistic practices. Ameliorating legislation has been introduced in Congress. ABA comments:

“Amazon’s overreaching dominance over multiple markets has squelched competition and new businesses. If Amazon were broken up today, we firmly believe the many markets in which they dominate would quickly diversify and grow and our communities would be the beneficiaries.”

Here’s another distribution wrinkle involving warring rade groups: Until recently, Amazon would only sell physical books to libraries, not eBooks or audio books. Since last summer it agreed to make 10,000 titles available to a library consortium called DPLA. Other publishers embargo libraries from licensing eBook editions of trade books for a number of weeks after the print versions have gone on sale. When New York and Maryland passed bills to end such embargos, the American Publishers Association sued for superseding copyright law. That pit the APA and the Authors Guild against the American Library Association, which had pressed for the legislation. As an author, I suppose I should stand with the APA and AG, but I feel kind of sorry for the libraries, who pay dearly to offer eBooks—and for patrons whose only access to libraries is over the Net. (Those without internet access are doubly out of luck.)

Squeezed by all sides, getting their books into libraries and bookshops is a persistent issue for indie authors, who lack the marketing reach and distribution channels enjoyed by commercial publishers. I tried to address this when my novel was published in 2018. At some expense I arranged for banner ads, email blasts, and ads in trade magazines targeting librarians and bookstore owners, but that failed to rectify the situation.

But all is not lost. If you can’t beat ’em, join ’em, they say, and that’s why I opened my own bookstore—in virtual space, without rent, furnishings, or inventory. This was in early 2020, just as the pandemic’s first wave was cresting, shortly after learning about a fledgling B-corporation calling itself bookshop.org. It’s a site where bookstores and publishers can post their wares and get commissions on sales. Each bookstore on bookshop.org can display on their “shelves” selected books of a certain genre or theme with full descriptions (but not previews). When a customer purchases a book from one of them, bookshop.org fulfills the order and remits 10% to the bookseller and 10% to a fund that gets distributed to indie bookstores (amounting to $18,633,873.26 last time I checked). I (and they) consider it an antidote to Amazon’s rapacious cannibalization of bookselling and many other businesses.

So when you’re in a bookish mood, mosey on over to the Perfidy Press Bookstore and browse about. It looks like this; the dollar amount applies to all of bookshop.org and grows by several thousand a day.

Also, if you enjoy giving books, bookshop.org can ship to any US recipient or provide them with one of our gift certificates.Feel free to suggest books we can add to our shelves and ideas for shelves by replying to this message. And remember, friends shouldn’t let friends buy books from Amazon.

—————
* Bookstores tend to insist that titles on their shelves be returnable to the publisher if they don’t move, and avoid stocking books that aren’t (as mine originally was). Authors receive no royalties on returns and self-publishers may have to shell out for shipping expenses, making bookstore exposure kind of a catch-22 for them.
** For some ins and outs of deploying imprints, see this article on publishing coach Jane Friedman’s blog.
*** As a sign of the times (i.e, since last autumn), tutoring is available for authors hoping to capitalize on #Booktok, for example the online workshop TikTok for Authors (no affiliation).
**** Here’s some advice to writers on publicity campaigns from Poets & Writers magazine.