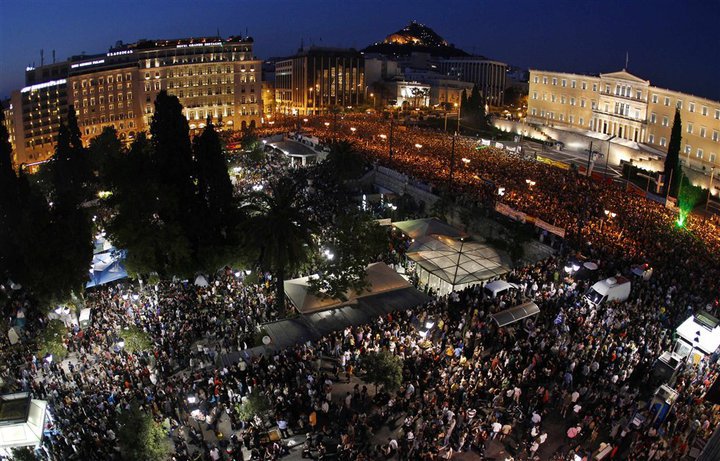 SUMMER IN ATHENS just wouldn’t be the same without mass protests culminating in police riots, and a nice one was shaping up in Syntagma Square. Everyone present knew the well-practiced script: a shield- and baton-bearing phalanx of helmeted men in blue confronts a defiant, boisterous mob outside some ministry, and at some flashpoint proceeds to harshly discipline the protesters.

The Hellenic Ministers—in this case of Finance—were nowhere to be seen, having fled the flood of trade unionists and assorted radicals surging into their sanctum. Behind lowered shutters and barricaded doors, the occupiers rifled through documents, ferreting out content that might incriminate the spineless functionaries who had once again sold out fair Hellas to her predatory creditors.

Knots of policemen passively looked on as Greek nationalist shock troops waded into the crowd to do their dirty work, provoking fights with protesters that typically went their way. But today, it seemed, they would not prevail. Already outnumbered by socialist, communist and anarchist austerity antagonists, nationalist cadres were soon overwhelmed by an arriving column of hundreds of militant unionists. Chanting for a general strike, the communist workers fanned out to surround the rank of riot police guarding the building, generating a human pressure wave that dispersed the rightists.

Careening away from the enemy influx, a stocky nationalist in a black Metallica t-shirt burst from the mob’s periphery, colliding with a taller man whose shirt was branded with a raised red fist crumpling a black dollar sign. The impact flung the collidee against a nylon tent with a duct-taped red cross, caving the insubstantial structure. The victim scrambled to his feet, shouting in German-accented Greek that rightists should leave the first aid station alone in case they might need it. He turned to attend to the damages, only to have the offended nationalist yank him to the ground by his blond ponytail and, muttering “Fae skata, vrómikos kommounistís,” launch a series of kicks at his midriff

Observing the one-sided altercation, a man trying to right the tent rushed the assailant wielding a tent pole like a rapier, angrily shouting “Párte to, Skatofatsa!” Taller, leaner, and decidedly buff, the swordsman jabbed with a fencer’s fancy footwork, quickly getting the upper hand. As the nationalist tried in vain to parry his assailant, a pair of policemen materialized. Without ado, they proceeded to separate the combatants and drag the socialist’s defender away, meeting his protestations with baton blows to his orange-tinted coiffure. The nationalist issued one last expletive and kick to his victim before running off.

Groaning, the man struggled up with the aid of the spent tent pole. Brushing away tears, he tossed it to a fair-haired woman with wire-rimmed glasses outfitted in a fatigue jacket accessorized with a Red Cross armband. “They got Kosta,” he panted in German. “I must get him released.”

Passing the pole to a cohort, she asked what had happened. Her response to his description of the assault and his partner’s unjust detention for coming to his aid was “Those goddamn Golden Dawn hooligans never get nabbed. What will they do with Kosta?”

“He could be sent away,” he gasped, holding his aching side. “I’ll try to bail him out tomorrow. It’s too chaotic now and I have to warn the others they could be attacked.”

“You might have broken ribs,” she cautioned. “Go lie down. Tent’s almost back up.”

He shook his head. “Not yet. Look, there’s Spyros. I need to brief him.”

Duty-bound, he hobbled away just as the concerned medic’s phone sounded the Marseillaise. She greeted her caller in Greek, also with a German overlay. “Salut, Penelope. What’s up, girl?” It was a concerned confederate, a ministry occupier seeking awareness of the law enforcement situation outside.

She retrieved a campstool to gingerly perch upon. Brushing away a blond bang, she squinted at the ministry headquarters and advised, “Looks like police are prying open the building’s shutters to invade your space. Finish your business and try to make a rear exit. Call me if you get hauled off. Good luck.”

Hoping the fate of the occupiers wouldn’t be her problem, she clicked off and ducked into the resurrected tent to see who else might be hurting. Finding no one in need of urgent care, she pressed her two remaining volunteers to pack up quickly, warning that the next assault on their outpost might not be so inadvertent. Ten minutes hence, their frail facility was bundled up and ready to go.

Hoisting a backpack and gripping a hamper of medical supplies in one hand and a canister of pepper spray in the other, she wove with practiced situational awareness through throngs of protesters and counter-protesters toward the Metro station. Strangers would assume she was an MD or nurse, not the radical activist the harsh politics of her adopted land had molded her into.

Across Syntagma Square, bullhorns blared as cops dragged bodies away, live ones she hoped. Mass actions like this were necessary but hardly sufficient, she knew, to bring about the stateless society she had come to envision. For that, less confrontation and more dialogs would be needed, plus strategies, allies, resources, and courage she had yet to gather in sufficient quantity. She wasn’t about to give up the struggle, but for now, wearied by the seeming futility of it all, she just wanted to get home and curl up with a book and a glass of wine. When liberation isn’t happening, a libation can help.

Back to Book Page